Oslo was nice, sunny, warm and clean. Though exceedingly expensive. Most distressing was two take-away pizzas for £45. We did get two free bottle of juice with that and they were nice pizzas but still!
Norwegians seem to like statues and fountains in equal measure. It seemed we couldn't turn a corner or walk 50 metres without seeing one or the other (usually both). My favourite was this polar bear: 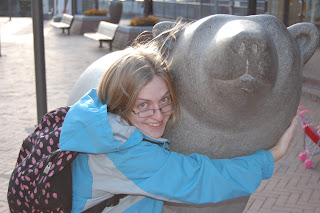 We went to a viking ship museum. They had three viking burial ships that had been buried over 1200years ago. Very strange to think that they had been sailed and rowed around oceans that long ago! There was even one that had been buried with two women on who were apparently queens or chieftans or something. It wasn't a warship but apparently a pleasure cruiser type thing: 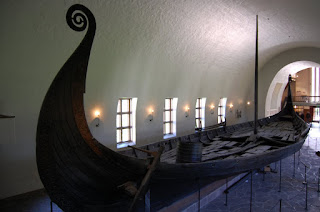 We had a walk up near a ski-resort a short bus ride from Oslo. I'd be very tempted to go back in Winter to learn to snowboard:)
Posted by Farrago at 11:58 No comments:

I'm on my last day of work before a week off. Huzzah! My first proper time off work for 2009... I've had a couple of days off so far but not been able to have a full week off. I can't wait. I'm seeing my family, going to Oslo for a few days and hopefully relaxing and knitting:)

I'm also really looking forward to Halloween. I always used to have a party when I was at school and university, but since moving to Edinburgh haven't really been able to. Our flat is too small for even a medium sized gathering, also very cream and rented so not ideal for fake blood and gore. Maybe I can persuade someone else to host one?? Either way I'm definitely going to make halloween cakes/buns/delectables!
Posted by Farrago at 13:13 No comments:

Things that make me happy

I received a little parcel of joy from Japan a couple of days ago. I'll wait and write a post all about that though.
When I got home from work today, I had this waiting to greet me: 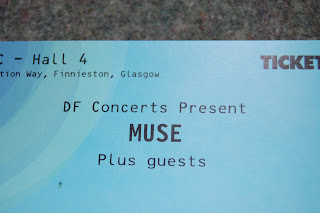 Also, sitting companionably on my desk all day, I had this little fellow who I knitted at the weekend: 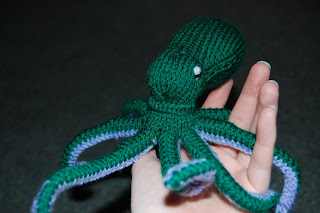 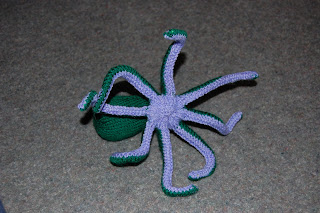 (Pattern from Amigurumi Knits, Hansi Singh)
Posted by Farrago at 16:49 No comments:

I like food, cooking, and all sorts of foodie programmes. I particularly like having cooking programmes to watch while eating my tea (dinner). Most of the time I don't actually make the recipes, but then I don't think the programme makers really mean people to. I think it's mostly entertainment, and that a lot of people perhaps watch these programmes as an alternative to making real food.
I'm currently watching the Jamie Oliver's American series. It's rather cheesy and he seems to have some sort of viagra obsession... It all looks quite nice but the food isn't really possible in a small Edinburgh flat. He mostly seems to be excited about the different methods of cooking food such as the cowboy "Dutch oven", basically but a cauldron in a fire, put stuff in it, put coals on top and leave it for several hours. Or alternatively get some big hunks of beef and cook them. That's not a recipe.
Delia Smith is a cook I've always quite admired. Her recipes tend to just work. I recently found her vegetarian recipe book in a charity shop recently and baked this cake: 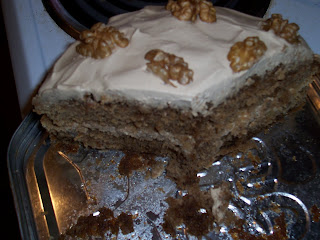 The only problem I have with Delia, is her icing fetish. If I follow her recipes faithfully the cake is always very good (eg coffee and walnut above) but the icing is totally overpowering. This recipe included 250g of creme fraiche and 200g of fromage frais, plus sugar and coffee. It was a struggle balancing all of it on the cake! I also like that most of Delia's recipes are on her website - http://www.deliaonline.com/
Great British Menu is another food programme I've enjoyed in the past. The general idea is to get lots of michelin starred british chefs and have a cook-off until you have one from each region. Then make them compete to do the starter, fish course, main course, and pudding for a banquet. Most of the recipes ( http://www.bbc.co.uk/programmes/b0071y6r ) are utterly insane and only really possible if you have an industrial size kitchen and about 10 lackeys. The winning puddings tend to be classics but done amazingly and are well worth the effort. I've made a custard tart (which involved 14 eggs or something crazy) and a treacle tart (a whole tin of golden syrup) and both were delicious. I don't even like custard or treacle tarts normally!
Last night I found out I'd missed the first in a new cookery series (thank you iplayer) by Nigel Slater. Nigel Slater is probably my favourite cook. He writes for the Guardian and just comes across as a really lovely guy. His new programme is about doing away with recipes. It is novel and delightful to find out I'm not the only one who makes stuff up while cooking, looking in the fridge and cupboards and deciding what to have. I follow recipes for puddings and cakes, but for savoury food, most of the time it just doesn't matter. I get ideas from recipes but I often can't be bothered spending time and money finding some exotic product when I have something similar in the cupboard.
It is incredibly refreshing to watch a programme that actually wants to give ideas and inspiration, rather than insisting you should measure everything to the gram and time everything to the minute. I'm definitely a fan of "Cook it til it's cooked".
Posted by Farrago at 07:35 No comments:

Scotland is really good for mountainbiking. The only problem is, people assume that if you live in Scotland, that means it's easy to go mountainbiking. Not necessarily. I live near the Pentland hills. But it's still nearly 4miles of road-riding to get there. There's a fair amount of variation in the Pentlands, being natural trails, but that does mean that with a lot of rain (remember this is Scotland so that's not uncommon) they can become somewhat swampy. There are parts that stay swampy even after lots of dry weather!
Anyway, I thought I'd share some examples of my local riding.
At the bottom of Puke Hill (because apparently if you don't vomit at the top you're not trying hard enough - this is a boy thing): 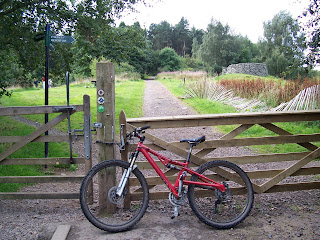 A reservoir (I can never remember which is which): 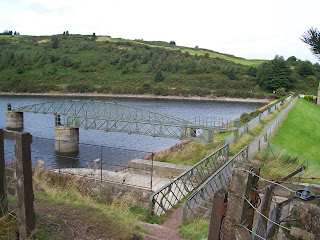 Some nice rooty singletrack with a reservoir on one side and sheep fields and hills on the other: 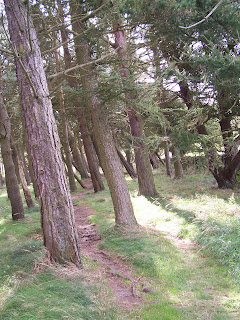 I will miss being able to cycle out to open(ish) country if we leave Edinburgh. Especially if we go to England with there lack of right to roam.
Posted by Farrago at 11:06 1 comment: